About the Information Resource Center

The number of users reached 9096 including 396 teachers, 12 masters, 4938 students, the rest of the population, college and school students. IRC has an automated library based on the ARMAT program. More than 12000 electronic catalogs and 2-3 forms of electronic readers have been introduced into the ARMAT database. IRC computer classes have 50 computers. All existing computers are connected to the Internet and provided with login and password.

At the portal of the university more than 134 Gb database is created, and students are regularly using it. The generated electronic resources package is written on discs and is given to each student. The readers can also get acquainted with 46 titles of newspapers and 51 titles published in Uzbekistan and Russia. 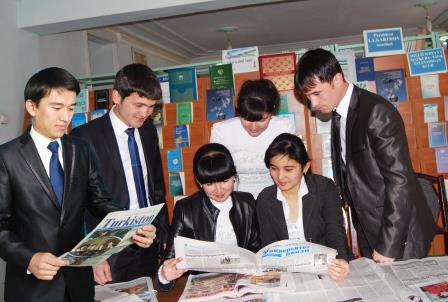 Building on the intellectual needs of the developing generation, promoting its spiritual, moral and cultural values, taking into account the modern innovative and information technologies, the IRC branch is also established in the city center to serve the city population, schoolchildren and college students are being watched.

Syrdarya Pedagogical Institute was founded in 1966. It is planned to train specialists in 5 directions. The necessary literature for these specialties was brought from Nizami Pedagogical Institute, Tashkent Institute of Irrigation and Melioration and the Institute Library was created. In the early years of the library, such as a subscription and a reading room were created.

On April 17, 2008, the city branch of the Information Resource Center opened solemnly and there was a national methodological seminar on the theme "Perspectives of population's access to modern information resources". Today, the branch serves the residents of the city, schools and colleges.

The Center of Information Science of the Gulistan Center is equipped with modern requirements. The IRC has specialized rooms with 50 computers connected to the Internet, scientific-methodical department conducts its activity in the system of electronic information and communication technologies. The IRC is also equipped with a scanner, printer, and xerocopy. The number of readers in the IRC has sharply increased as soon as the new information technologies enter the Information Resource Center. For example, in the IRC, together with the total number of branches, 9096 people are provided with quality services.

"Information Resource Center" (IRC) provides users with information and library services on the basis of modern requirements and develops the forms of forming a high library of cultural library services with the modernization of the information based on information and communication technologies to meet the needs of the population by using the forms of remote access and delivery of information resources to the needs of consumers, as well as providing access to the broadband Internet access network, pupils and students and the Ziyonet educational portal, introduced in the Republic for teachers and trainers, to provide consumers with the services of academic, art, popular literature, accelerate delivery of news and electronic information and news dissemination through the press and mass media. use them y opportunities are created.

In addition to the main building, the University Information Resource Center has offices in the economy, at the student's home, as well as in the city center. They have the opportunity to quickly and efficiently use various information resources through an intranet network developed by university professionals. University students are provided with a login and password.

The IRC has a dedicated hall consisting of 50 computers connected to the Internet, a computerized subscription department with servicing of electronic catalogs, computers. Scientific-methodical department operates in the system of electronic information and communication technologies. based automated workplaces. At present IRC specialists have introduced more than 12000 electronic catalogs of the existing software. IRC funds are enriched with new types of electronic information resources. Access to educational, scientific, artistic and popular information resources on the basis of libraries of the Republic and foreign countries is expanded. About 40,788 books are stored in the IRC's joint venture.

• Preparation of information gathering on demand of readers.

• Preparing and presenting electronic copies of scientific and popular magazine articles in the library fund.

Courses on computer use, internet and databases, and other automated library information systems

• autoreports of dissertations protected in Uzbekistan. Data is provided on SD or magnetic disks via the local network of the library or by e-mail by scientists, graduate students and students.In addition to the main building, the University Information Resource Center has offices in the economy, at the student's home, as well as in the city center. They have the opportunity to quickly and efficiently use various information resources through an intranet network developed by university professionals. University students are provided with a login and password.